Strawberries and more strawberries. This year’s harvest has been very fruitful. Everything is made with love and picked ourselves, with our little angel devil. So let’s start and produce some delicious goodies: Strawberry sorbet, strawberry smoothies, marmalades and this year special – Happy Strawberry Pudding Tart.When I was younger, I used to have strawberry tart with my every birthday in July. As the strawberry harvest in the land, I currently live in, is much earlier, my boyfriend has ordered it all for The Father’s Day. Therefore, I present you the unique combination of almond meringue, vanilla pudding curd and of course, lovely fresh strawberries. This one really looks and tastes stunning! 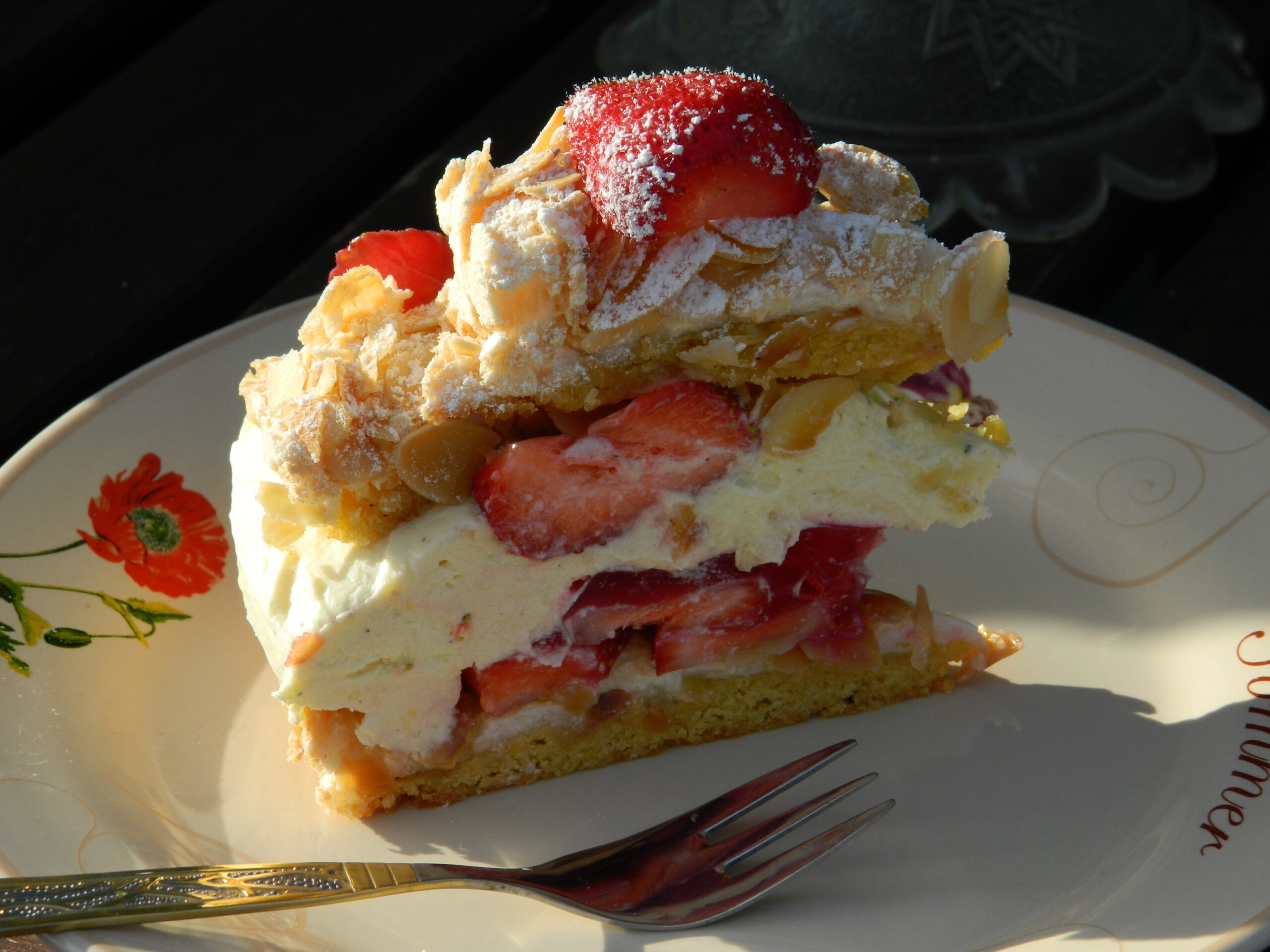 First, pour the milk into a small deep pan, add 2 tablespoons of caster sugar plus vanilla pudding and mix on medium heat.
Cook until it reaches the boiling point, then let it thicken for about 2 minutes until it starts bubbling and take off the heat. Let it cool down entirely.

Place softened butter in a large mixing bowl.
3 tablespoons of icing sugar, vanilla sugar and pudding in. Start whisking on low-speed until incorporated well. Then, increase the speed to the highest and continue whisking until it becomes a very smooth and fluffy texture.

Whisk in the curd and lemon zest. Mix and taste. Accordingly to the sweetness, add more icing sugar. Keep in mind that The Tart will be sweet enough.
Refrigerate until further use.

Preheat the oven to 160 degrees.

In a large mixing bowl put butter, 75g of caster sugar and 1 package of vanilla sugar. Start whisking on low-speed until incorporated.

Next, start adding egg yolks, one at a time. First, whisk on low-speed until incorporated, then, increase the speed to highest. Whisk until brightens and gets nicely fluffy.

Stir in flour and baking powder. Add a pinch of sea salt.

Divide the dough into 2 lightly greased springform pans lined with some baking paper (I used 22cm). The dough is extremely butterish and fragile. My tip is to wet your fingertips and have patience. Make it as equal and thin as possible.

Place the egg whites into a medium metal bowl and start whisking. When it starts running, start adding sugar, 150g of caster superfine sugar (50g of sugar per 1 egg white) in total. Continue until you get snow peaks.

Gently mold the snow over the tarts and smoothen with a spatula. Sprinkle with a good amount of almonds.

Bake in the oven for about 20 minutes. Take them out and let them cool down entirely.

Pour 200ml of cold water into a small deep pan and stir in gelatin.
Flavour up with 2 tablespoons of caster sugar and cook until it reaches the boiling point. Then, 15 more seconds and take off the heat. Let it cool down until further use. Once it is not entirely hot, you can continue. Do not let it thicken too much.

Place slices of delicious strawberries over the top of the 1st tart and sprinkle with gelatin. Use a small metal spoon and be patient, few at a time, so you won’t damage the whole base. Let it sit for a couple of minutes and continue.

Layer with 1/2 of The Vanilla Pudding Filling and gently smoothen with a spatula. Place The Pudding primary in the middle, so it won’t leak too much. Refrigerate for 2 hours after placing ½ of The Filling. This way you make sure that it will stay nicely firm. Then, layer with the second one and refrigerate once again.

Take the 2nd tart and cut it in 12 pieces as per image below.

Slice the remaining strawberries and start decorating. Have fun with it and do not overthink it. Take 1 piece of The Tart and 1 large strawberry slice and place them gently alongside each other. Continue until there is nothing left. Finish up with strawberries in the middle and sprinkle with icing sugar.

Get inspired. Sign up and receive favourites collected PLUS unique recipes.

My weekend has just started! I would call it the t

What a lovely day! I love Austria, do I mention it

Little things. Have you all a sunny day! #culinary